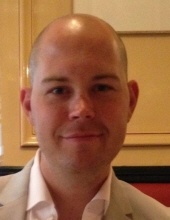 John Thomas Rybinski passed away on April 15, 2022 after a long battle with brain cancer. He was 37.

Born on March 12, 1985 to Tom and Janice Rybinski, John grew up in Redford with his mother and older brother, Tim. While his immediate family was small, his cousins, aunts and uncles, and beloved grandparents, Walt and Betty lived just a few blocks away. This village of relatives ensured John could always find additional support, love, and fellow troublemakers close by.

A man of many interests—especially ones that involved being outside—John loved to fish and hunt with Uncle Mark, bike with his Uncle Jim, and play, watch, and talk about sports with his family. At Catholic Central High School, he joined the varsity football team and played in two state championship games.

After nursing school, John was back in Michigan working his dream job as a cardiology telemetry, internal medicine, and medical procedural unit RN at the University of Michigan Hospital. He loved getting to know his patients, exploring different areas of nursing, and mentoring and learning from fellow nurses. He had found his calling.

In October of 2013, John had a massive seizure and was diagnosed with brain cancer. John had his first surgery in November of that year, underwent a year of chemo and radiation, and went into remission in 2015. Despite the hardships he had endured, his infectious smile and laugh never faltered.

In 2020, John had another seizure and was diagnosed with grade 4 glioblastoma, an aggressive brain cancer. Despite the grim diagnosis, John didn’t slow down. Between chemo cycles, John would run 5 miles a day, ride his bike across county lines, and spend quality time with his kids at his family’s cabin in Kalkaska.

On April 15, 2022, due to complications from cancer and Covid-19, John passed away at home surrounded by his mother, Tim, and Randy.

John’s memorial will take place on Friday, June 10, 2022, starting with a rosary at 9:00 a.m., at 10:50 A.M. Nightingale Ceremony and at 11:00 a.m. service at his family’s church, Our Lady of Loretto in Redford. After mass, John’s mom and stepdad will host John’s large community of loved ones for a barbecue at their Plymouth home—exactly what John would have wanted. Michigan fans are encouraged to wear their U of M attire to celebrate John, and wearing black isn’t encouraged (unless that’s your thing).

John had written that he wanted his memorial to be “a celebration” with “no crying or sadness.” While we can’t promise we won’t be sad, we can promise that we’ll celebrate John for the charismatic and joyful person he was - and not just on the day of his memorial, but forever.

In lieu of flowers, John’s family is asking for memorial donations to The American Brain Tumor Association - https://give.abta.org/give/261975/#!/donation/checkout and to join Team Headcase for a virtual brain cancer walk on May 15. Let’s do John proud and do all we can to kick brain cancer’s butt!

To order memorial trees or send flowers to the family in memory of John Thomas Rybinski, please visit our flower store.