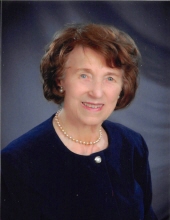 Joanne was born in Woodville, Ohio August 5, 1930. She passed away August 17 at the age of 91. She was the second of seven children of Walter and Hilda Oestreich.
Joanne was goal-oriented. After graduating from Luckey High School, she worked for a year to earn enough money to begin college. She worked and paid for her own college education. In 1954, Joanne graduated from Bowling Green State University with a B.S. in Business Education and a minor in Social Studies and English. Later, in 1966, she earned her Master’s Degree in Business Education from the University of Michigan.

Joanne moved to Michigan in 1954, and began her teaching career at Bentley High School in Livonia. There she met the love of her life, William (Bill) Cole, to whom she was married in 1957. She took a break to start a family. Upon returning to the workforce, she became the first court recorder for the 16th District Court in Livonia. During that time, she also began teaching evening classes at Schoolcraft College. She rejoined the Livonia Schools in 1971, and retired in 1995.

Joanne was an optimistic person and an adventurer. She loved to travel. As teachers, she and Bill managed their time and money carefully to take advantage of the summers. Family camping vacations often lasted for weeks, mostly on road trips to the north and west. In 1968, they pulled a 24-foot trailer to Alaska, traversing the then-gravel Alaskan Highway. Upon becoming empty nesters, Joanne and Bill traveled to Europe three times, Hawaii, Australia and New Zealand, and Russia. Joanne loved capturing memories in photos. She also enjoyed family history; she gathered and assembled family records, and became the health historian for the Oestreich family. Joanne touched many lives, including family members, friends, and students. She was known to always be respectful and inquisitive of others. She loved to laugh, and loved large family gatherings.


Memorial contributions can be made to: First Step, 44567 Pinetree Drive, Plymouth, MI 48170-3840. First Step’s mission is “to provide comprehensive services to individuals and families impacted by domestic and sexual violence.

Click here for a video tribute to Joanne. https://www.kapwing.com/videos/61258093cae39b006ac779cf
To order memorial trees or send flowers to the family in memory of Joanne Oestreich Cole, please visit our flower store.