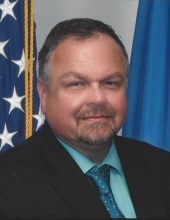 Jeff had too many hobbies to count. He had two classic cars that he enjoyed entering in car shows. He had a great love of history. He volunteered at the Yankee Air Force Museum and the Willow Run Air Show.

Jeff believed in faith, family and education, respectively. He worked hard to send all of his children to twelve years of Catholic school.

While working in the trades, he continued his education and eventually received a Master’s in Business Administration, and began working on his doctorate. His education opened new career paths that led him to become Educational Training Coordinator at the Sheldon Road Ford Plant, facilities manager at the VA Hospital in Detroit, and finally to become Regional Training Manager for TSA/Homeland Security at Detroit Metro and surrounding airports.

Jeff was never happier or prouder than when the whole family was together. He especially enjoyed big family vacations to the cabin and Disney World. He always had a smile on his face when it came to spending time with his grandchildren. He loved being “Papa”. He was greatly loved by many and will be deeply missed.

A Memorial Gathering will take place Sunday, November 18, from 1-8 at the Schrader-Howell Funeral Home, 280 South Main St., Plymouth, MI. A Funeral Mass will be held on Monday, November 19, at Our Lady of Good Counsel Church, 47650 N. Territorial Road, Plymouth, MI at 10:00 a.m. In lieu of flowers, memorial donations may be made to Yankee Air Force Museum.

To order memorial trees or send flowers to the family in memory of Jeffery Ky Willman, Sr., please visit our flower store.