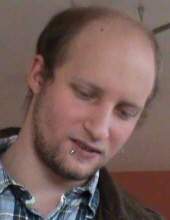 Jason Andrew Kryka passed away at home on September 21. 2019 at the age of 30. Jason was born in Ann Arbor, Michigan, on January 18, 1989. He is the youngest of his other two brothers, Richard and Kyle, born that day. He is survived by his father, Anton Kryka Sr., and his three brothers, Anton Jr., Richard, and Kyle. Jason was preceded in death by his mother, Guyla Kryka, his grandparents, Jack and Clara Kryka, and Ken and H. Bernice Lindsey, and his older twin brothers, John and James.

After Riffle’s Restaurant closed, Jason took up a new job and worked at Richard Tool and Die in New Hudson, Michigan. Later, he worked at several other tool and die businesses in the area.

Jason played the guitar and some piano. He played bass guitar in his older brother’s band.

Visitation for Jason will be Saturday, September 28, from 3-6pm at the Schrader-Howell Funeral Home, 280 S. Main St., Plymouth, 48170. His Funeral Service will begin immediately following the visitation at 6pm.

To order memorial trees or send flowers to the family in memory of Jason A. Kryka, please visit our flower store.