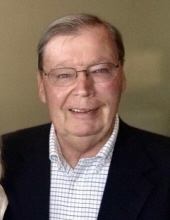 Jim graduated from Detroit’s Mackenzie High School in 1958. Swimming
was his sport of choice from an early age beginning at Detroit’s Fisher YMCA.
He captained the High School’s Award-Winning Swim Team.
Jim continued his education at Bowling Green University of Ohio.
He retired from a Career in the Detroit News Distribution Department.

Jim loved being in the outdoors and particularly loved the activity of
Fishing. Wading in the rivers of Northern MI or chasing after Walleye
in his boat on Lake Erie was the way Jim recreated. He will be remembered
in a Family only Celebration and per his request, his remains will be
scattered in the Platte River near Honor MI.

To order memorial trees or send flowers to the family in memory of James Von McMahan, please visit our flower store.