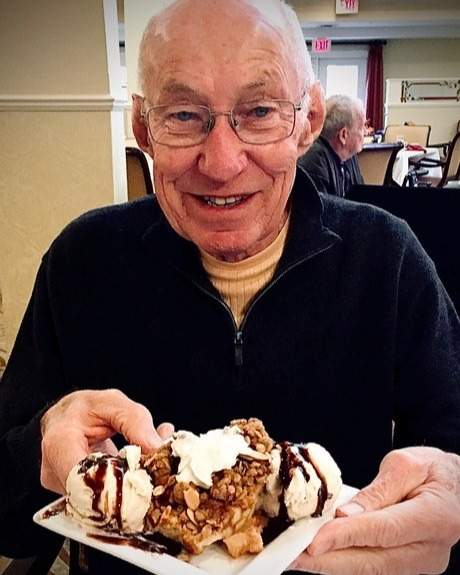 Jim, a native of Dearborn, Michigan, graduated from Dearborn High School, and served 4 years in the United States Navy as an Aviation Electronics Technician, Third Class, flying missions for the U.S. Air Force — from California, to Pearl Harbor, to Japan. He never set foot on a Navy ship.

James attended junior college for two years and went on to work for the County of Wayne, for 39 years, in the Field Engineering Office.

He and Mickey moved from Dearborn Heights to their home in Canton where they lived for 49 years.

Jim’s retirement years were spent crisscrossing the United States with Mickey, visiting relatives and collecting antiques. He was a Lifetime Golden Member of the National Parks System, a Top Gun at the Western Wayne County Conservation Association, and a member of the Detroit Nomads Travel Club, traveling to Australia, Denmark, Norway, and other exotic locations.

A friend to many, Jim was a man who enjoyed living. He went about his day with a whistle on his lips, a spring in his step, and a smile for everyone he met.

Never one to sit around, Jim made the most of each day — rising early and packing as much into each day as possible. He lived by the mottos of “Daylights-A-Burning”, “Make Hay While The Sun Shines” and “Betcha I Can”.

Our Sweet Papa Bear will be deeply missed.

A memorial service will immediately follow the visitation at 4:30pm.

To order memorial trees or send flowers to the family in memory of James R. Lilley, please visit our flower store.