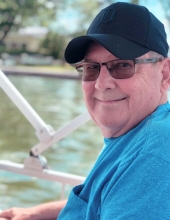 James John Murphy of Highland, Michigan passed peacefully surrounded by his family on Saturday, March 5th at the age of 73.

Jim was born on October 22, 1948 to Frederick and Jane Murphy in Detroit, Michigan. After graduating from Cody High School in 1966, he went on to study at Schoolcraft College before serving his country bravely in the Vietnam War.

After his service, he worked for Ford Motor Company for more than 30 years and created lifelong friendships with his coworkers. In 1972, he married former spouse, Denise Econom, and adopted her daughter Candace Eckles, the daughter of his close friend and fallen service member, Pat Eckles. Jim and Denise also went on to have daughters, Joanna and Lauren.

Jim was a great storyteller and he enjoyed time spent with his family and friends. He was a passionate reader and could often be found fishing or taking his family for boat rides at his home on Duck Lake. He spent his retirement split between Michigan and his home in Sarasota, Florida where he was a beloved member of that community.

Anyone who knew Jim knew that he was a loving father, a cherished sibling, and a loyal friend. He is survived by daughters, Candace (Tom) Cothron, Joanna Murphy, Lauren (Louis) Johnson and his sister, Jane Anne Murphy along with his two grandchildren, nieces, and nephew.

No services will be held at this time. In lieu of flowers, the family requests donations be sent to Angela Hospice or the VFW in his name.

To order memorial trees or send flowers to the family in memory of James John Murphy, please visit our flower store.