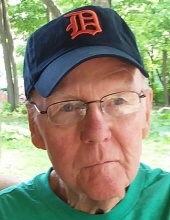 James was born in Detroit on July 15, 1927 to parents Michael & Rose Howe. In 1947 James would enlist in the United States Army to help with the post war effort. James loved to watch baseball, boxing, hockey and he really enjoyed dancing with his beloved Maryellen.

The Howe Family would like to thank Cambrian Senior Living for the care and support that was given to their Dad during his time there.

A funeral service will be held at the Schrader-Howell Funeral Home 280 South Main St, Plymouth on Monday, January 21st at 11:00am. Visitation Sunday, January 20th at the funeral home from 1:00pm – 8:00pm.

Burial and full military honors will be held on Tuesday, January 22nd at 10:00am at Great Lakes National Cemetery in Holly, Michigan. Memorials may be made to Heartland Hospice 333 North Summit St- P.O. Box 10086 , Toledo, Ohio 43699.
To order memorial trees or send flowers to the family in memory of James C. Howe, please visit our flower store.