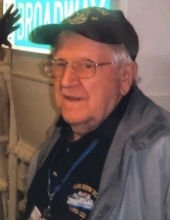 Fogt, Jack V. passed away February 12, 2022 at the age of 97. He was born April 22, 1924 to Rhine and Ruby (Faulder) Fogt. He was preceded in death by his wife, Leah and is survived by his daughters, Janet (Robert) Schmidt and Linda Fogt. Also survived by his grandchildren, Todd Schmidt, Sharon Fogt, and Shannon Johnson and great-grandchildren, Trevor Johnson and Dominique Johnson.

Jack worked until he was 85 as a self-employed fence contractor. He was a veteran of WWII having served in the United Stated Navy. He was a lifetime member of the USS New York Alumni Association and loved to attend the reunions. Jack received a quilt from Quilts of Honor. He played football for the Navy back when they wore leather helmets. He was also a proud member of the VFW, American Legion and the Plymouth Elks lodge. Jack will be deeply missed by his family and friends.

A Funeral Service will take place Friday, February 18, 2022, 1 PM at the Schrader-Howell Funeral Home, 280 S. Main St., Plymouth. Friends may visit beginning at 11 AM. Jack will be laid to rest next to his beloved wife at Glen Eden Cemetery, Livonia. Memorials in Jack’s honor may be made to the American Cancer Society.
To order memorial trees or send flowers to the family in memory of Jack V. Fogt, please visit our flower store.