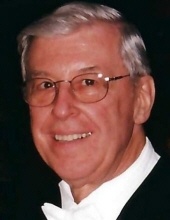 Dr. Harry Streeter Heget, Jr., passed away peacefully at home in Plymouth, Michigan on the morning of Saturday, May 15, 2021 with his family at his side. He was born in Detroit, Michigan on May 30, 1930 to Florence V. (née Mills) and Harry S. Heget, Sr., the second of two children.

The family lived in Detroit’s North Rosedale Park neighborhood for many years along with his aunt, Lulu Mills. He graduated from Castle Heights Military Academy in Lebanon, Tennessee in 1948. Following high school, he earned his B.S. in Pharmacy in 1953 from Wayne University in Detroit. After graduation, he served in the Air Force, where he was stationed at Kimpo AFB in Korea. Following his time on active duty, he returned to Detroit where he earned his D.D.S. degree from the University of Detroit College of Dentistry in 1960. He married Judith Kaye Coulter of Highland Park, Michigan on April 15, 1961.

Following a brief time in private practice, Dr. Heget returned to active duty in 1961 and served in the U.S. Air Force Dental Corps, stationed at Travis AFB. He then transferred to the U.S. Navy Dental Corps in 1963, where he was stationed at Quonset Point Naval Air Station, Norfolk Naval Air Station, and finally Naval Air Facility Washington. While on active duty, he served on the USS Sandoval. In March 1967, he separated from active duty and returned to civilian life in the Detroit area as a staff dentist at the VA Hospital in Allen Park.

In 1972, the family moved to Edmond, Oklahoma when he became Chief, Dental Service at the VA Hospital in Oklahoma City, a position he held until his retirement from VA in 1990. The University of Oklahoma started a new College of Dentistry in 1972, and Dr. Heget was affiliated with the college on a part-time basis from its beginning until his retirement from OU in 2007, where he had been appointed as Clinical Associate Professor of Endodontics. Dr. Heget received his Master of Education degree from Central State University in Edmond, Oklahoma in 1983. From 1967 until 1990, Dr. Heget served in the U.S. Navy Reserve Dental Corps, and he retired with the rank of Captain with over 31 years active and reserve military service. He was a member of Sojourners Lodge #483 F.& A.M. and Psi Omega Fraternity. In 2009, he relocated from Edmond to Tulsa, Oklahoma to be near his daughter and her family. In 2019, he returned to the Detroit area where his son resides.

Dr. Heget was preceded in death by his beloved wife of 39 years, Judy, in June 2000; sister Barbara Garman in February 2000; and brother-in-law Russell Garman in January 2021. He is survived and will be forever remembered by his son, Jeffrey Heget (Matthew Landes) of Plymouth, Michigan; daughter Jennifer Wise (Ben) of Broken Arrow, Oklahoma; grandsons Jacob Wise and Ethan Wise of Broken Arrow, Oklahoma; sister-in-law Laurie Brooks (Al) of Gates, Oregon; 1 niece and 2 nephews; and 3 cousins.