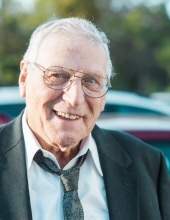 Harry was born on December 9, 1931 in Detroit to his parents, the late Harry E. and Margaret (nee Wright) Owsley.

Harry grew up in the Motor City and, from an early age, developed his love of fast cars. He eventually raced his own cars. He loved watching the careening of speeding cars around the track, the smell of gasoline fumes and the roar of engines….especially when HE was behind the wheel of his own race car. His love of NASCAR inspired his daughters to promise and fulfill taking him on a trip to Las Vegas a few years ago for a NASCAR race.

Harry was a military veteran who proudly served his country in the United States Air Force. After his discharge from his service, he met the love of his life, Betty Robinson. They were married on February 8, 1954 and together they raised a family of seven beautiful children. From there came more marriages and more children resulting in sixteen grandchildren and 5 great-grandchildren. To say family was the most important thing in his life was an understatement. His love for his family WAS his life!

He opened his heart and his home well beyond his family. When his children were young and the family was still growing, after a long day at work in the summer, his greatest joy was sitting by their in-ground swimming pool in the evenings watching his children and all of their friends on Whitby Street in Garden City join them for fun while splashing and playing at the Owsley’s house. His relaxation consisted of a hot cup of coffee (even on a 90-degree day) and watching his children and anyone else’s on the block who wanted to come over and swim for a couple of hours.

Hunting and fishing with his boys were some of the most enjoyable times of his life. Their trips to “the farm” will long be remembered as some of their most treasured times together. From the time his sons, Harry and John were very young, they learned from their dad how to fish and to hunt. It was about being out there on crisp and cool mornings in the fall when the woods “wakes up” and the hunting dogs are on high alert. It was never about how many fish were caught or who would be the first to “get a deer”. It was about a father and sons activity and the camaraderie of their own “fishing and hunting club” ….even if it meant sometimes coming home empty-handed, but having had a great time all the same.

Harry was so proud of his five daughters. Whether it was a swim meet or a softball game, a new job, or high academic achievements, he was there to let them know how proud he was of each of them and would continue to cheer them on well into adulthood. He would often remind them how proud their mother would be of them and their outstanding accomplishments. He wanted nothing more than for each of them to marry honorable men. He was blessed with five sons-in-law that he respected and loved like sons. He knew they would love and protect his girls and their families just like he did. He was also truly blessed with two lovely daughters-in-law who were welcomed into his heart and home and loved like they were his own daughters. Over the years, their deep love and respect for him never stopped growing. Family isn’t always blood. It’s the people in your life who want you in theirs and, Harry welcomed each of his sons-in-law and daughters-in-law into his heart and home with a big smile and open arms.

When the grandchildren came along, he was so overjoyed with excitement! It was softball games, dance recitals, high school and college graduations, and weddings all over again and then great-grandchildren too! He loved going to Alpena every summer and teaching his grandchildren to fish at the cottage. He also shared his love of hunting with his grandsons. From father-to-son and grandfather-to-grandson, he cherished those special relationships and times with all of them and passing down his vast knowledge and love of the sport of fishing and hunting. He was “Papa” to all of them and they loved him dearly. His granddaughters loved him so much. Whenever there was a family get-together, Harry would be smothered with hugs and kisses by all of his granddaughters. It was a race to see who would get to him and give him the first hug. They loved "Papa" and loved being with him. Evidence of that love can be seen in a steady stream of photos upon more photos and videos from get-togethers at holidays, birthdays, fishing at Alpena and even when there was no particular celebration at all. The old adage holds true...."a picture is worth a thousand words." Many photos captured those special moments with each saying how he loved them so deeply and how they loved him back even more.

Even at age 87, Harry was into social media….he was tweeting!! He kept up-to-date on anything and everything going on in the news events of the day. Not to be outdone by a much younger generation, he too joined with the rest of the world sharing his opinions tweeting and re-tweeting and receiving feedback from all of his followers.

Lastly, his dog “Lucy” will certainly miss her Master. He loved “Lucy” like she was another child in the house. Just recently, he mentioned how much he still missed his little dog, “Casey” who had stood faithfully by his side (and on his lap too) for many years until “Lucy” came into his life to make him smile again and triggering feelings of unconditional love and protection.

Harry was a great example of a husband, father, father-in-law, brother, brother-in-law, uncle, grandfather, great-grandfather and, friend. He was loved more than he ever knew. He was an inspiration to all who knew him. He didn’t know the impact of his character and integrity on so many people. He never complained about his pain. He loved us and we loved him. We are sad that he is gone and will miss him dearly. But we are happy to know that he is no longer in pain and will cherish our memories of him forever.

Friends may visit on Thursday, May 23rd from 5:00 P.M. until 8:00 P.M. at the Schrader-Howell Funeral Home, 280 South Main Street, Plymouth. A Funeral service will be held at the Funeral Home on Friday at 11:00 A.M. to be officiated by The Reverend Drex Morton. Harry will be laid to rest with Military Honors next to his beloved wife, Betty at Holy Sepulchre Cemetery in Southfield.

The family requests memorial contributions be made in memory of Harry E. Owsley, Jr. and in honor of his great-grandson and 5th generation great-grandchild carrying on his name, Harry Estel Owsley, V to Seedlings Braille Books for Children, 14151 Farmington Road, Livonia, Michigan 48154 and Lions Clubs International, 300 West 22nd Street, Oak Brook, Illinois 60523-8842. Memorial envelopes will be available at the Funeral Home.

To order memorial trees or send flowers to the family in memory of Harry E. Owsley, Jr., please visit our flower store.