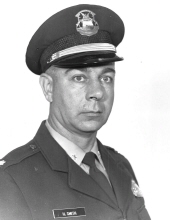 Harold E. Smith, 87, of Canton, Michigan, passed away in the company of his loving wife and family members at his home on February 21, 2018. As the first-born child of the late Harold Russell and Jean (Ziegler) Smith during the Great Depression, Harold learned the value of thrift at an early age. He served his country honorably for four years in the U.S. Marine Corps. He then served the community for 27 years with the Detroit Police Department, where he rose to the rank of Inspector. During his career on the force, Harold encountered people from all walks of life, had many adventures, and was molded into the man of strong character we all knew.
As a young policeman injured while directing traffic, fate brought him to Mt. Carmel Hospital, where he met Rosemary Nackerman, a student nurse. They ultimately married on January 15, 1955, and began their 63-year story. After retiring from a second career as Assistant Vice President/Deputy Director of Security for NBD, Harold delighted in touring the U.S. and Canada, from Alaska to Florida to the Maritime Provinces, with Rosemary in their RV. He also enjoyed attending family events, no matter the distance.
Harold was a hard-working and dedicated family provider. He worked second jobs, and took classes on nights and weekends to obtain bachelor’s and master’s degrees. His innate mechanical abilities allowed him to complete numerous DIY home improvement projects for his family’s benefit, without YouTube or Internet resources. He served his Catholic parish as an usher and the broader community as a volunteer, including delivering Meals on Wheels, providing low-income tax return assistance, and participating in veterans’ events.
His many selfless acts comprise his exemplary legacy of strong family values and service to others. He will be greatly missed.
Harold is survived by his wife, Rosemary; his sister, Bonnie Roberson; and four children, Sharon Jean (Steven) Conkle, Shannon Grace Barnes, Shawn Renee (Peter) Worrel, and Harold Terrence (Lee Pizzimenti) Smith. He is preceded in death by his daughter, Sandra Lynn, and his siblings, Harvey (“Tom”), Barbara, and Beverly. Harold was the proud grandfather of 13 grandchildren and 11 great-grandchildren.
Visitation at Schrader-Howell Funeral Home, 280 S. Main Street, Plymouth, MI on Friday, from 2:00-8:00pm with a prayer service at 7:00pm. A funeral Mass will be held on Saturday, February 24, at 10:30 a.m. at St. John Neumann Catholic Church, 44800 Warren Road, Canton, MI. Friends may visit at church beginning at 10am. Interment at Holy Cross Cemetery on Beaver Island, MI, will be at a later date to be determined. Memorial donation suggestions are St. Jude Children’s Research Center, Memphis, TN; Angela Hospice, Livonia, MI; or Beaver Island Rural Health Center, Beaver Island, MI.
To order memorial trees or send flowers to the family in memory of Harold E. Smith, please visit our flower store.