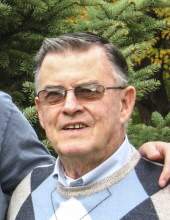 
Harold graduated from SouthEastern High School in 1948. He went on to work at General Motors Hydra-Matic as a Metallurgist with a career spanning 24 years. Harold also attended classes at Wayne State University in the field of Metallurgy. For 42 years, Harold worked Game Day Press Box Security Staff for the Detroit Lions. He loved sports and he was an avid Red Wings fan during the Gordie Howe era. Not only did he love his Red Wings, he loved his Michigan Wolverines and enjoyed many years of tailgating with dear friends on Saturdays in Ann Arbor. Go Blue! He enjoyed bowling leagues with his wife, Betty and the Hydra-matic gang and the same was true for golf. He played at Washtenaw Country Club, neighborhood courses and Vero Beach, FL. Harold’s hobbies would not be complete without the mention of hunting. Every year he headed up north and made his famous chili to feed the guys at the cabin and hopefully come home with a deer. Fishing at Crooked Lake and the Great Lakes was another favorite pasttime. Summer vacations were spent camping in northern, MI .


Over the past 5 or more years Harold was on a dementia journey and in recent years had chronic heart and kidney disease. Harold was a fighter, father, brother and friend to the very end.


A Memorial Funeral Mass will be held at St. James Catholic Church in Novi, MI on Friday, July 19. Visitation starts at 10 am, funeral mass in the chapel at 10:30 am with Military detail in his honor for service in the Army.

In lieu of flowers, donations for dementia research may be made in Harold’s honor to: https://www.alzinfo.org/
To order memorial trees or send flowers to the family in memory of Harold E. Parker, please visit our flower store.