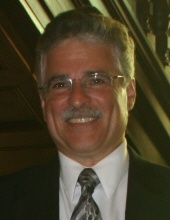 Glenn Stewart Radicella of Gregory, Michigan and formerly of Meadville, Pennsylvania died March 3, 2019. He was 63 years old. Glenn was born on January 2, 1956 to Vincent and Mary Radicella. Glenn is survived by his beloved wife of 16 years, Pamela Radicella, his loving children Ben Radicella, Angela (Knate) Borland, and April Radicella, dear step children Kristen Shepherd, Lora Glenn, and Tom Glenn, his cherished grandchildren Aurora, Hailey, Hailey, Maddie, Khloe, and Jordan, and his siblings Sam Radicella, and Cynthia (Harold) Wenrich. Glenn was preceded in death by both of his parents, and his brother James Radicella.

After graduating high school, Glenn proudly served his country in the United States Navy in the Seabees. He then went on to work for and retire from the Post Office after 30 years. Glenn then started a second career as a Maintenance Supervisor for McKinley Properties. Glenn was a gifted carpenter and piano player. He enjoyed playing volleyball and working at all survivalist skills. Glenn was also a member of the Worship Team at Victory Christian Church in Coitsville, Ohio. More than anything, Glenn loved his family and friends, and always put them above all.

A Celebration of Life Service will be Tuesday, March 5, from 5-8pm at Glenn and Pam’s house, 6700 Reilly Road, Gregory, MI 48137. Glenn will receive full military honors when his body is laid to rest at Great Lakes National Cemetery on Wednesday, March 6, 2019 at 10:30am.
To order memorial trees or send flowers to the family in memory of Glenn S. Radicella, please visit our flower store.