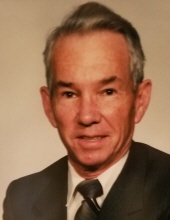 Glenn Wickersham died on October 29, 2021 in Livonia, MI after a fifteen month battle with cancer. He was 96.

Glenn was born on September 15, 1925 in Detroit, MI to Virgil and Alta Wickersham, the third of four sons. The family moved to Indiana to farm in 1929, when his father, a carpenter by trade, could no longer find work and the family savings were lost during the Great Depression. The family lived on the farm until Glenn was 10 years old and he often talked about his chores on the farm and the 2 cows he had to milk daily beginning at 8 years of age.

The family moved back to Detroit in 1935. Glenn’s father would take odd jobs hanging wallpaper when the weather was inclement and started taking Glenn with him when he was about 13. Glenn became a master wallpaper hanger, a skill that he shared with many friends and family over his lifetime. Glenn even passed on his skills to his daughter, Glenda.

Glenn graduated from Wilbur Wright High School in Detroit and immediately enlisted into the Army Air Force in February, 1944. He was assigned to the 90th Bomb Group of the 5th Air Force. Glenn reached the rank of Staff Sargent as a gunner in B-24 bombing raids, flying 30 missions in the Pacific Theater. On May 10, 1945, returning to base from a bombing mission, his plane landing gear failed and the plane veered off the runway, hitting a parked plane. The bottom of the bomb bay was ripped out, and Glenn was thrown from the plane. The medical staff didn’t think he would make it through the night, but somehow he survived. He spent the next 9 months recuperating in army hospitals until he was discharged. Years later, Glenn loved attending the 90th Bomb Group Reunions.

After the war Glenn married his teenage sweetheart, Dorothy M. Simpson, on April 8, 1949. They had two children, Dale Steven and Glenda Kay. They were married 22 years before Dorothy passed away from a long battle with cancer.

Glenn married Janice L. Sutton on December 15, 1973, bringing her children, Gary and Hugh, into the family. Janice and Glenn loved to travel to Hawaii frequently.

Glenn worked in the automotive industry in Detroit as a production engineer. He retired from General Motors with 30 years of service at the age of 60.

Glenn’s hobbies included golfing and fishing. Glenn had 2 holes-in-one, the second one at the age of 80 when he was blind. He also loved to go on fishing trips with his work friends where they would fly into remote lakes in Canada.
Glenn attended St. Timothy Presbyterian Church (Livonia) for many years. He was also a fixture in his neighborhood, always working on the yard and walking his dog Spot.

A funeral service will be held at St. Timothy Presbyterian Church 16700 Newburgh Rd, Livonia on Wednesday, November 3rd at 11:00am. Mr. Wickersham will lie in state beginining at 10:00am until time of service. Private burial services will be held at Parkview Memorial in Livonia.

For those who are unable to attend the funeral service will be live streamed.

To order memorial trees or send flowers to the family in memory of Glenn Gusler Wickersham, please visit our flower store.