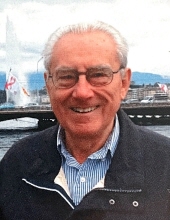 Gil was born in Nice, France on February 28, 1929. He was the beloved husband to Marlene Gaibrois for 61 years, father to Leslie (Richard) Skillman and Paul (Lisa) Gaibrois, grandfather to Lindsay and Thomas and great-grandfather to Noah.

With a French mother and Swiss father, Gil and his sister, Suzanne grew up in Nice, Zurich and Geneva. After receiving his engineering degree, he traveled by ship to New York and settled in Detroit. He decided to stay when he was hired by Detroit Edison as an electrical engineer where he continued to work for over 40 years, receiving many awards for his technical papers. Gil became a proud US citizen in 1954 and charmed many with his French accent. He met the love of his life Marlene at work and never looked back. During the next 65 years, Gil was a wonderful husband, father, father-in-law, grandparent, co-worker and friend.

He loved to sail on the Detroit River and ski in northern Michigan, as he had as a boy in Switzerland. He enjoyed bowling, golfing, cruising and reading. Growing up Catholic, he had a strong faith in God throughout his life. Although he will be missed, we are comforted to know that he is dancing with Marlene and sharing stories with his heavenly family and friends.
To order memorial trees or send flowers to the family in memory of Gilbert Louis Gaibrois, please visit our flower store.