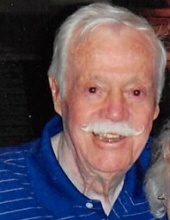 George L. Sharpe, age 95 of Plymouth, passed away peacefully on April 15, 2020. He was born in Detroit on January 29, 1925 to the late Harry and Grace. George is survived by his beloved wife of 71 years, Delores and their five children, Patrick (Laura), Michael (Kathy), the late Peggy (Michael Klein), Susan (Randy Leslie) and Carolyn (Kent Roman). He was the loving “Gramps” to 8 grandchildren (Michael II, Andrew, Emily, Randy II, Elizabeth, David, Brian & Megan) and 10 great-grandchildren.

Nobody loved life more than this sailor-turned-bread salesman. George ran track at Chadsey High School until Uncle Sam came with “Greetings”. He served in the Navy in the Pacific from September, 1943 to the end of WWII. When George arrived home, he courted Delores and they married in September, 1948. George found his calling in sales, and made it to Top Salesman at Ward Foods. When the plant closed in 1971, he opened his own business, D&G Bakery Inc., until 1986, having several years of success. George loved boating, sports, playing euchre and a good game of poker. He was an avid fan of the Detroit Tigers, Red Wings, and Lions, and had been a Lions season ticket holder for decades. After retiring, he took up golf and the fun really began! George was always smiling, had a quick wit, and was always good for a funny joke.
He was adored by his family. He enjoyed camping and canoeing trips on the Pere Marquette and summer days at Aunt Millie’s cottage, most of all because he was surrounded by his family. George was always ready for what life had to bring and was especially loved by his “Best Buddy”, Randy II. George exemplified what it truly means to enjoy a life well-lived. His family wants to thank all his caregivers and Angela Hospice for the special care and support they provided.

A celebration of George’s life will be scheduled at a later date.

“I’m gonna sing you a little song. It won’t be very long. “Diddly dee, diddly dee, and now it’s all gone!”
To order memorial trees or send flowers to the family in memory of George Sharpe, please visit our flower store.