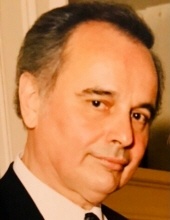 George Trudell of Plymouth and Dearborn Michigan passed away on Thursday, February 11th, at the age of 81 after a long battle with congestive heart failure and cancer. Born June 7, 1939 in Detroit Michigan, George is the son of George F. Trudell and Barbara J. (nee Mattie). George was married to his lifelong love “Nan” (nee Osinski) for 60 & 1/2 years.

The couple met in second grade at St. Alphonsus Elementary School. George is known by his classmates as a leader of the St. Alphonsus Catholic High School Football team, in the late 1950’s, when “St. Al’s” won the Catholic League City Championship George’s Sr. year. George earned most valuable football player at this time. George attended University of Detroit for both his bachelors and master’s degrees.

After graduating from the U of D in the early 1960’s, he began his career in education as an elementary schoolteacher and teacher’s union representative. He quickly became a leader in the development of the Michigan Education Association (MEA) Wayne County teacher’s union, ultimately serving as a Uniserv Director. For over 30 years he led the union and the teachers in the county, enabling teachers to move from wages near the minimum, to a wage closer to that of the auto union factory worker and later a truly professional wage. This contributed to the nickname George earned as ‘The Legend’ within the teacher community.

George is survived by his loving wife Nancy A. Trudell, and his two children George M. (Beth) Trudell and Ann Marie Eaton, and his four grandchildren, Andrew, Colin, Helen, and Eliza as well as his sister Joan (John) Knoerl. Preceded in death by his parents and siblings, Mary (Ray) Plante, John (Gloria) Trudell, Jim (Toni) Trudell, and Barbara Trudell.

A Funeral Service will be held on Monday, February 15, 2021 beginning at 10:30 A.M. at Our Lady of Good Counsel Catholic Church, 47650 North Territorial Road, Plymouth, Michigan.

For those who cannot attend and wish to view the Funeral Service in a safe environment, the funeral will be live streamed.


For those who wish to make a donation in George's honor, contributions may be made to...

From Al Gaiss a co-worker of George at MEA:

Nancy, my heart is breaking in hearing this news. Ken Gable who passed in the spring of last year, George and I spent many years together advancing the lives of teachers and later support personnel in Wayne County and particularly for WC-MEA-NEA. George was bright, generous and dedicated his life to the improvement of the status of education and for the teachers whom he loved. He was the most sincere and dedicated to his beliefs person I have ever known and worked with. It was a pleasure to watch him work, listen to his strategies, develop his plans for our dozen districts and build what was possibly the strongest teacher union in all of Michigan if not the United States made up among a conglomerate of districts from 200 to 600 [union members] in size. George now walks with the angels, he kept the faith and lived life as it should be. I am proud to have known George in the manner I have and grieve with you, George Jr., Ann Marie and all of your grandchildren. He was loved, he will be missed and his good deeds were enjoyed and appreciated by the thousands who followed his lead. RIP George Trudell, you made a difference.

To order memorial trees or send flowers to the family in memory of George Robert Trudell, please visit our flower store.