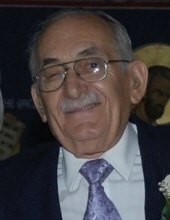 George John Jacobs of Northville, died November 28, 2018 at the age of 92. He was born in Saskatchewan, Canada on May 1, 1926 to parents John and Matilda Jacobs. George was the beloved husband of the late Arelia Jacobs who died this past April. George is survived by his loving children George (Cheryl) Jacobs, and Elaine Rogozan, his precious grandchildren Matthew (Anna), Rachel (Jason), Sara (Christopher), Melissa (Nathan), and Rebecca (Benjamin), his cherished great grandchildren Anna, Katelyn, Abigail, Joshua, Addison, Andi, Cora, Olivia and Brooks. Dearest brother of Eleanor and the late Vasile. George was preceded in death by his beloved son Carl at the age of 19.

George loved to go fishing especially at the cabin he built himself up north in St. Helen. In 1990, he and Arelia moved to Venice, Florida. They spent their winters in Florida and summers in Michigan. While in Florida, George enjoyed flipping houses. In his down time he enjoyed baking with his granddaughters who have now mastered his special cheesecake recipe.