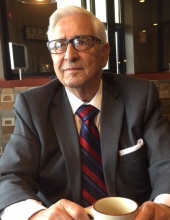 George A. Fabbri, born in Pence, Wisconsin, on September 9, 1929, to parents Chester & Marie passed away in Livonia, with his family surrounding him, on March 5, 2018. George proudly served his country during the Korean Conflict in the United States Navy. On February 27, 1954, George would marry the love of his life, Nancy Jane “Dinky” Thomas, and together they were blessed with five loving children, Arthur (Kim) Fabbri, Donald (Beth) Fabbri, George C. (Leslie) Fabbri, Annette (Gary) Pollack, and Karen (Dan) Stowe. On February 20, 2013, George would have to give his beloved Nancy Jane “Dinky” back to the Lord after 59 years of marriage. George is the proud grandfather of Amy Fabbri, Michael (Cynthia) May, Jason (Shannon) Fabbri, Jacob (Blythe) Pollack, Ryan Fabbri, Sarah Pollack, Joshua Fabbri, Chase Fabbri, Matthew Stowe, Carly Fabbri, Madeline Stowe and Ryan Schaff. Great grandfather of 8. Dear brother of Tony (Roberta) Fabbri and the late Eugene (the late Evelyn) Fabbri.

Visitation Thursday from 5:00pm-8:00pm at the Schrader-Howell Funeral Home, 280 South Main St., Plymouth. A prayer service will be held on Friday at 1:00pm at the funeral home with family receiving friends beginning at 12:30pm until time of service. The prayer service will conclude with a family eulogy. Cremation will follow, and a graveside service with military honors will take place in Ironwood, Michigan, with times and dates to be announced.

To order memorial trees or send flowers to the family in memory of George A. Fabbri, please visit our flower store.