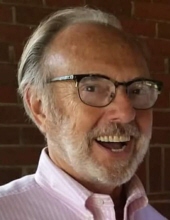 Fred was a passionate advocate for the City of Plymouth, a natural born marketer, a non-stop idea generator, a quiet philanthropist, a devout Ohio State Buckeye, a whiskey sour drinker (no fruit in a manly glass, please), a retailer, a realtor, and civic leader.

If you ran into him on the street and asked how he was… “Old and crotchety” he’d say, however, he was anything but.

Fred will be remembered for his creativity, ideas, spectacular sense of humor, enduring drive, love of tradition, attention to details, compassion, character, and friendships.

Fred was born in Port Huron, Michigan. When his father, Charles, had a career opportunity in Ohio, he and his wife, Katherine, moved the family to Cleveland Heights where Fred grew up. After graduating from Cleveland Heights High School Fred attended THE Ohio State University. He received his degree in Marketing.

After graduation Fred moved to Detroit for an opportunity with the J.L. Hudson Company. He was a high performer, but working for someone else wasn’t for him. He decided to move to Plymouth to open his own men’s clothing store, John Smith of Plymouth, at the age of 25. Later it was renamed Fred Hill Haberdashers. After a quarter century in the clothing business Fred transitioned to real estate becoming one of the most successful agents in the area.

As an entrepreneur Fred was always looking for ways to promote his business. For years he rented two elephants for Plymouth’s annual 4th of July parade and outfitted them with signs for his store. But in 1985 the elephants weren’t available. Fred needed a new idea. While watching the movie Stripes with his kids, he got it. What if he recreated the graduation scene but instead of Army fatigues the 16-man team wore business suits, red ties, and carried briefcases? Fred expected it would be a one-time performance, but when the Drill Team turned the first corner at Plymouth’s parade… “I had 16 stars”.

The Fred Hill Briefcase Drill Team would continue to Do Wah Diddy for 30 years to cheers from crowds at Plymouth’s Good Morning USA Parade, America’s Thanksgiving Day Parade in Detroit, The Cherry Festival in Traverse City, The Fiesta Bowl in Tempe, AZ, the Indianapolis 500 and many more. The Drill Team was even a featured performance during two appearances in New York City’s Macy’s Thanksgiving Day Parade. The last Drill Team performance, in 2015, was where it all started… his beloved Plymouth.

Famously a control freak, Fred made things better. His enthusiasm for Plymouth led him to serve as President of the Plymouth Community Chamber of Commerce, Plymouth Community United Way, Kiwanis Club of Colonial Plymouth, and Plymouth Downtown Development Authority. Fred also served on numerous boards and committees including the City Charter Commission, Salvation Army Board, and the Plymouth Jaycees. He was inducted into the Plymouth Hall of Fame in 2003. Fred received the Kiwanis Tablet of Honor in 2014, one of the highest honors bestowed by the Kiwanis International Foundation.

Fred brought an over-abundance of charisma, charm and fun to every interaction. His list of accomplishments is long, but it was his family and friendships that are the success stories of his life. He knew how to bring people with him… The Plymouth Men’s Book Club (good guys doing good stuff), The Kiwanis Club Golf Outing, The Plymouth Ice Festival and, yes, the Briefcase Drill Team.

Fred leaves behind his better half Teri John, his children Christopher and Jennifer, daughter-in-law Nicole, Teri’s children Stephanie, Ryan and Brett, brothers Charles and Gerald, sisters-in-law Connie and Susan, grandchildren Emerson and Bennett, and much-loved, too numerous to mention, extended family and dear friends. Fred is reunited with his son, Jeffrey, who preceded him in death as a child.

Face masks must be worn for the Funeral Service at First United Methodist Church, Plymouth.

For those who wish to view the funeral service, it will be live-streamed.


Memorials may be made in lieu of flowers to the Plymouth Kiwanis Foundation, 47400 Stratford Drive, Canton, MI 48187. Contribution envelopes will be available at the Funeral Home.
To order memorial trees or send flowers to the family in memory of Frederick W. Hill, please visit our flower store.