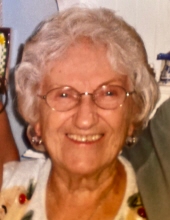 She moved to the United States with her first husband, an American merchant marine in 1945 to a rural town in Pennsylvania. That marriage ended in divorce, and she and Lee moved back to Scotland. They found their way back to the States in 1952 where she met Bill Murray. They married a year later and settled in Brooklyn and later Long Island where they raised their family.

She moved to Plymouth in 1988 where she was a member of the Plymouth Follies and the Community Chorus. She later moved to Livonia where she continued her over 50 year membership with the Eastern Star. She volunteered for many organizations - among them Livonia Police and Fire departments and Greenmead Historical Village. She was an Airport Ambassador at Detroit Metro for nearly 30 years where she received numerous accolades. Flora was an active member of Tops for 31 years, the SOS Club, Dyer center and Livonia Senior Center and she was a multiple medal winner at the Western Wayne County Senior Olympics.

She loved to dance, sing and travel. She visited the majority of the United States and over 30 countries on five continents. She lived a full life in every way. She was known as “Mama” and “Scotty” to her extended family. We will miss her and love till the end of our days.

A funeral service will be live-streamed on Tuesday, April 21st at 11:00 A.M.
from the Schrader-Howell Funeral Home. Please click the “Tribute Wall” link at the top of Flora’s obituary at 10:50 A.M. in which time the live-streaming will begin. The immediate family will gather privately prior to the service.

Please be advised that in observance of the governmental order from the State of Michigan, we will be limiting funeral/visitation gatherings to 10 people at any one time. When in attendance, we kindly ask, for the safety and well-being of the families we serve and for your health, that everyone practice social distancing and consideration for other guests in attendance by keeping your visit brief.

Flora will be laid to rest next to her beloved husband, Bill at Oakwood Cemetery in Islip, New York.

To order memorial trees or send flowers to the family in memory of Flora Murray, please visit our flower store.