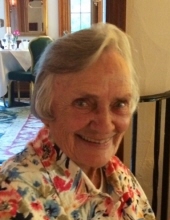 Fay M. LaVigne, age 91, of Plymouth, Michigan formerly of Boylston and Eastham, Massachusetts passed away on April 16, 2020. Fay was born on January 10, 1929 in Waltham, Massachusetts.
Fay graduated from Boston City School of Nursing in 1951. She later earned a Bachelor’s degree from Worcester State College and a Masters Degree from Assumption College. Fay taught for more than 30 years at Fitchburg State College, Worcester City, Burbank and Hahnemann Hospital schools of nursing.

Fay loved Massachusetts. She raised her children in Boylston and later enjoying retirement in Eastham with her husband of 40 years, David. Fay enjoyed going to the gym, riding her bicycle, walking on the beach, clamming, gardening, sailing, feeding the birds and ‘shaping up’ those around her.

Fay was an avid reader and could frequently be found on the deck, sitting in the sun with book in hand.

Her ashes will rest next to her husband at Arlington National Cemetery.
To order memorial trees or send flowers to the family in memory of Fay Marie Lavigne, please visit our flower store.