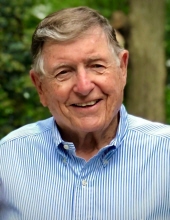 Eugene Patrick McQuaid, of Northville, passed away peacefully on June 19th, 2021. Gene was born to his parents Eugene and Marie McQuaid (McKeon) in Brooklyn, New York on January 23rd, 1934.

Gene and Terry, with their children were relocated to Michigan by the 3M Corporation from Emerson, New Jersey in 1974. Gene worked at 3M in executive-level sales for over 25 years before starting his own venture as a dealer for 3M in Toledo, Ohio.

Gene will always be remembered for being an endearing husband, father, and grandparent - along with being a constant presence within his parish community and many years as a volunteer with the Knights of Columbus. Gene was known for his love of cooking, appreciation for music, enthusiasm for sports and playing golf.

In lieu of the flowers the family would like you to consider a charitable contribution in Gene's honor to be directed to the St. Jude Children's Research Hospital, 501 St. Jude Place, Memphis, TN 38105-9959.
To order memorial trees or send flowers to the family in memory of Eugene Patrick McQuaid, please visit our flower store.