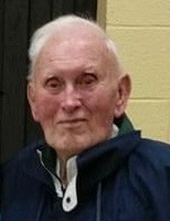 Eugene was born on February 1, 1931 in Union City, Tennessee to his parents, the late Virgil and Gladys (née Champ). Eugene is the beloved and devoted husband of Margaret Powell. They have been married for 66 years. He is the loving father of Lance Powell and Mandie (Sergio) Salas; dearest brother of Spencer (Donna) Powell; brother-in-law of Mike (Susan) Yager, and brother-in-law/brother of David (Maryellen) Thomas; close friend/brother of Fred VanRiper; very close friend of Mike (Susan) Butzin and Wayman (Joan) Henson. He is also survived by many other friends and relatives. Eugene is pre-deceased by his brother, Odell Powell and sister, Lulabell Simmons.

Prior to Eugene’s longtime career in the railroad industry, he proudly served his country during the Korean War. After his discharge from the military, he began his 49 years with CSX Transportation as a Switchman and Brakeman. Perhaps it was his love of the job on the railroad that led him to his romance of the rails and love of trains. Over his long career, Eugene witnessed many technological revolutions in freight and passenger trains from steam to diesels.

He loved the yearly family trip to Disney World in Florida. He simply just had fun and good times with the family. He loved the attractions and walking around in the beautiful sunshine in a place he so loved on earth. He enjoyed exploring new attractions each year and tasting new foods. There was nowhere better than Disney World.

Eugene also enjoyed watching westerns – especially those with John Wayne. He liked the portrayal of the tough-guy hero and action on horseback adventures. As in most westerns, good triumphs over evil, an ideology Eugene believed in too.

He also enjoyed country music. Country music will always address the full range of cares and concerns that occur in everyday life. He loved the lyrics that were just plain and simple, but told a great story in song. He especially liked the music of Johnny Cash.

Eugene will be laid to rest with Military Honors at Riverside Cemetery in Plymouth.