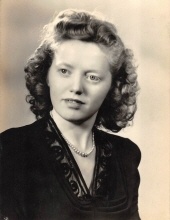 Ethel was born on May 1, 1926, in Munhall, PA, to her parents, Frederick C. and Ethel (Hallett) Cowdell. She married her husband, William, on July 17, 1948, moved to Detroit, and later (1965) to Plymouth. For 60 years they lived full lives, devoted to each other, their family and their friends. She resided in Plymouth until 2017, when she moved to Buford, GA, and finally to Jacksonville, FL. Ethel is survived by three of her four children - Linda M. Marlow of Livonia; CDR William C. (Diane) Murphy, USN, Retired of Jacksonville, FL and Janice R. (James) Alves of Buford, GA. Her daughter, Gail A. (Barry) Bupp passed away in March 2016. She is also survived by her grandchildren, Daniel (Andrea) and Peter (Sarah) Marlow, Caleb (Robin) and Hannah Bupp, Rebecca Murphy, Jacob (Megan), Matthew (fiancée – Kara Rice), Elizabeth and Sarah Alves and six great-grandchildren.

After graduating from high school, Ethel attended Business College and then was a secretary in the Bishop’s offices of the Methodist Church in Pittsburgh until her marriage. Later, she was employed for over 20 years as the secretary at Gallimore Elementary School in Plymouth.

Ethel began taking piano lessons as a young child, which led to a life-long love of music, serving the Lord in many ways with this talent. At the age of 16, she became the pianist in her hometown church until she was married. This passion for music became a lifetime devotion to either playing the piano or singing in the choir, when possible, in every church she attended. She also would accompany her daughter, Gail, and many other high school students when they played in regional and state competitions. Ethel’s other hobbies included doing needlepoint, knitting sweaters and blankets for orphan children, knitting hats for cancer patients, knitting projects for various cancer fundraisers, doing jigsaw puzzles, reading her Bible, and sending notes and cards to family, friends and shut ins.

The funeral service will be livestreamed


To order memorial trees or send flowers to the family in memory of Ethel May Murphy, please visit our flower store.