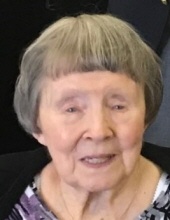 She was born in Detroit, Michigan on July 22, 1926 to her parents, Eugene and Dorothy (née Bibin) Moreau.

Friends may visit on Wednesday, April 7, 2021 at St. Kenneth Catholic Church, 14951 North Haggerty Road, Plymouth beginning at 10:00 A.M. until the time of the Funeral Mass at 11:00 A.M. Elaine will be laid to rest at Holy Sepulchre Cemetery in Southfield.

For those who wish to make a contribution in Elaine's memory donations may be directed to St. Kenneth Catholic Church. Envelopes will be available at the Funeral Mass.
To order memorial trees or send flowers to the family in memory of Elaine D. Roman, please visit our flower store.