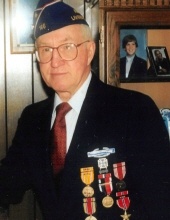 Edwin Felczak of Westland, died February 23, 2020 at the age of 95. He was born in Detroit, MI the third of seven children to Walter and Mary (nee Zaczyk) Felczak. Edwin is survived by his loving children Edwin Jr. (Jeannine Hauck), Michael Sr. (Shirley Padlo), Marcia (Paul Kopacz) and Ritaanne (Brady Otto), his 11 cherished grandchildren, his 16 precious great-grandchildren and his dear sister Dorothy Formella.

Edwin was a graduate of Hamtramck High School. After graduation, he went on to serve his country in the United States Army. Edwin was a member of the 41st Infantry Division in the Pacific during WWII . He earned several medals including the Bronze Star. Edwin is a proud member of the PLAV White Eagle Post 116, VFW Post 6896, and the American Legion.

Edwin married the love of his life, Rita (Zacharias), on July 5th, 1947. Edwin worked for more than 30 years at General Motors/Fisher Body. He enjoyed baseball where he umpired for several years for Wayne/Westland Parks & Recreation. He enjoyed bowling, golfing, playing pinochle, and spending time with his extensive family.

Visitation will be Thursday, February 27th, from 2-8pm at the Schrader-Howell Funeral Home, 280 S. Main St., Plymouth, MI 48170. There will be a Rosary Service beginning at 7pm. The Mass of the Resurrection will be Friday at 10:30am at St. Edith Catholic Church, 15089 Newburgh Rd., Livonia, MI 48154. Edwin will be in state at Church at 9:30am. In lieu of flowers, memorial contributions to the Capuchin Soup Kitchen, Angela Hospice Home Care, St. Vincent DePaul, or St. Edith’s Catholic Church would be appreciated.

To order memorial trees or send flowers to the family in memory of Edwin Felczak, please visit our flower store.