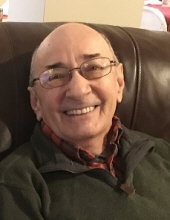 Doug joined the Navy in 1962. His first mission was the “Bay of Pigs” off the coast of Cuba. It was a very tense time for the US as the Navy formed a blockade in response to discovering Soviet nuclear missiles being capable of reaching major US cities. It was very tense at home waiting for news about Doug. We wept when he returned home unscathed.

Doug loved life. He appreciated everything with joy and laughter. He loved his children, step children, grandchildren, sister and brother. He always enjoyed a cold coke, saying “Ahh” after a long drink. Doug was among few people who actually enjoyed going grocery shopping, he would get excited to pick out food for the upcoming week’s dinners. Lebanese food was one of his favorites, he could never get enough. Black and white western movies, “Shane” and “Old Yeller” were his favorites. He was thrilled to see Hopalong Cassidy in person at the Olympia. When he wasn’t watching western movies, he enjoyed reading western books, however, his most cherished book was “Call of the Wild.” He would often talk about the first time he read it and was completely enthralled. Doug had a fantastic sense of humor, a ready smile, projected humility and had a tender and warm personality. He loved God with all his heart. He will be deeply loved and missed by all who knew and loved him.

Family and friends may visit the Schrader-Howell Funeral Home, 280 South Main St. Plymouth, Michigan 48170 on Tuesday, February 18, from 1:00 PM to 9:00 PM. The Funeral Service will begin at 7:00 PM. Visitation will continue following the Service.
Memorial donations may be made to the American Heart Association or the VA Ann Arbor Healthcare System.
To order memorial trees or send flowers to the family in memory of Douglas J. Essad, please visit our flower store.