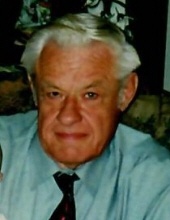 Donald J. Geistler, age 89, of Livonia died April 8, 2022 at Woodhaven Retirement Community in Livonia. He was born June 25, 1932 in Livonia and was a lifelong resident. Mr. Geistler was an auto mechanic for many years, and worked at different Pontiac dealerships. He enjoyed going to car shows, building model planes, and had an appreciation for antique cars. Beloved husband of the late Patricia. He is survived by his 2 sons, Walter (Jeanette) Geistler and Michael (Janine) Geistler, 3 grandchildren, Matthew Geistler, Ryan (Paige) Keatts, and Randy (Kristi) Keatts. He is also survived by 6 great-grandchildren, a sister, Mary Priebe, step-sister, Arlene Smithson, sister-in-law, Gladys Geistler, brothers-in-law, Ken Plummer & Ron (Mary) Plummer, step-brother-in-law, Ed Taylor, and several nieces and nephews. He was preceded in death by his parents Walter F. Geistler and Alice M. Carr, his step-father Herman Rossow, a brother, David Geistler, 2 step-brothers, Harold and Raymond Rossow, and a step-sister, Helen Taylor.

A funeral service will take place at 11AM Wednesday at Schrader-Howell Funeral Home, 280 S. Main Street, Plymouth. Burial will follow at Riverside Cemetery in Plymouth. Visitation will be Tuesday from 2-8 PM at the funeral home. Memorials may be made to the American Heart Association or the Charity of the donor’s choice.
To order memorial trees or send flowers to the family in memory of Donald James Geistler, please visit our flower store.