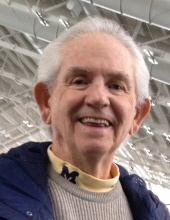 Don A. Riehl, 87, passed away peacefully on May 20, 2019, at Starvation Lake. He was the beloved husband of Barbara (Carne). Loving father to sons Kevin (Dianne) Riehl and Dan (Michelle) Riehl. Proud grandfather of Brian (Jennifer), Jessica, Cooper and Carter Riehl.

Born in Detroit, he was pre-deceased by his mother, Barbara Riehl Gwazdowski and father Allen Riehl. Don, a star athlete at Cooley High School, earned a total of 9 athletic letters in track, baseball and football. He received a scholarship to Hillsdale College where he played football and baseball and earned his Bachelor of Science degree in 1954. He subsequently earned a Master of Physical Education degree at Wayne State University. He was a loving, kind, and wise father and grandfather and a gentle and knowledgeable coach. For 44 years Don taught and coached multiple sports for boys and girls at Thurston High School, Marshall Jr. High, and Pierce Jr. High in the South Redford School District. He was inducted into the Michigan High School Football Coaches Hall of Fame in 1991 and was honored by the Basketball Coaches Association of Michigan for the number of victories. His girls’ basketball teams at Pierce, won 52 consecutive games. He also was a long time MHSAA basketball official. Don loved University of Michigan football and has been a season ticket member for nearly 30 years. In his down time, Don’s favorite hobby was fishing, where in 2009 he won a master angler award for the 2nd largest smallmouth bass in the State of Michigan at 7 lbs. 5 oz. He enjoyed his summer residence at Starvation Lake and winter months in Venice, Florida. He and his wife receive frequent correspondence from students and athletes spanning decades.