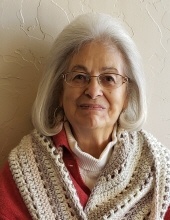 Dolores Núñez Shmyr Buesser, almost 89, of Plymouth, MI, passed away on February 8, 2022, unexpectedly after a stroke, but peacefully in the loving hands of her children.

Dolores was born in the Bronx, New York in 1933 to Florence (New York) and Ezequiel Núñez (San Luís Potosí). She attended Central Needle Trades High School, New York, NY, where she excelled in the needle arts and design and developed a life-long love of art and fashion. After a brief time at Fashion Institute of Technology, she married J.Shmyr. She loved to play Gin Rummy, impishly delighting in beating most, doing the daily Detroit Free Press’ crossword puzzle, listening to Latin Jazz music or symphonies and dancing at every opportunity!

Dolores was an extraordinarily positive person. Her beautiful smile lit up the room. She grew up in the Bronx borough of New York City and had many stories of life in the city and travels to Mexico and Cuba to visit family. After her first marriage, she took on the task of being a single mother in the Detroit of the 60’s. She worked hard as a waitress while raising her 3 young children in Lafayette Park, in downtown Detroit. Working at the Roostertail Restaurant, she would bring her children to hear the live music of the Supremes and other Motown artists. She was a fabulous cook and eventually began a catering business, where her children intimately helped and learned not only to appreciate good food but also how to work hard. From there she began using her education by doing alterations and designing for the businesswomen of downtown Detroit and eventually became the shoulder to lean on for bridal dress alterations at bridal stores in West Bloomfield. She made education a priority and watched as her children graduated from Michigan State University, University of Michigan and Harvard University.

Dolores is survived by her brother Peter Núñez and wife Heidi, who was a close sister-in-soul; her adoring children, Christine Shmyr Forsch (Randall), John P. Shmyr (Claudia) and Ronald M. Shmyr (Juliann); She delighted in her 10 grandchildren, Margaux (Garrett), Kiefer (Beverly) and Nickolas (Kimberly), Emily (Josh), Matthew (Sarah), Megan (Jon), Melissa (Jesse), Celia (Neil), Joann and Dolores. She was the supreme grandmother and made all of them the center of the world with her smiles, love, adventurous doings and food and treats. In addition to her grandchildren, her 11 great-grandchildren knew her well. She leaves behind her nieces and nephews, Jacquelyn, Greg, Maureen, Charles, Diane and David. She is also survived by stepson, Andy Buesser (Linda). Preceding her in death was her sister Mary Núñez McDonald Gilbert, her parents, Florence and “Charlie”, and most recently, her beloved husband, Anthony Buesser.

Arrangements for cremation are by Schrader-Howell Funeral Home. 734-453-3333

A private family celebration of life will be held in the future in springtime.

Memorial donations in Dolores’ name may be made to: (organizations that Dolores was always generous with)
- LA SED, Detroit, MI; www.lasedinc.com
- Capuchin Soup Kitchen, Detroit, MI; https://www.cskdetroit.org/
To order memorial trees or send flowers to the family in memory of Dolores Nunez Shmyr Buesser, please visit our flower store.