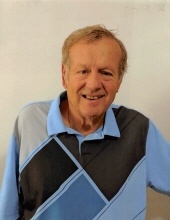 After a hard fought battle with Alzheimer's, David Paul Palmer, age 77, passed away peacefully on September 28th, 2021 while his wife Terri held his hand.

A Texan through and through, his childhood was spent in Port Neches, Texas where he learned to fly at an early age by crop dusting. In 1964 he enlisted in the United States Air Force where he was based at Perrin Air Force Base, Longview, Texas. During that time he was married and blessed with two children, his son Paul and daughter Paula. Upon discharge he joined the Texas National Guard while he pursued his business degree from the University of Texas. He later earned his way in aviation by flying for Continental Airlines and then charter planes.

He soon joined the pet industry, settling in Cibolo, Texas. In 2004 while working for Breeder's Choice Pet Food David met his partner and future wife, Terri Bennett, in her store, Specialty Pet Supplies, in Plymouth, Michigan. He became a beloved member of the pet store, always there to greet the customers with a smile and a story. His quick wit and humor never failed to charm the staff and customers that he loved so much. He even managed to endear himself to the kind and caring staff of Ashley Court during his last year.

David was an avid sportsman who enjoyed golfing, fishing and bow hunting. He loved riding motorcycles and was an active member of Michigan's Gold Wing Riders.

He was preceded in passing by his sister Carolyn Ann Torrence.

For those who cannot attend, the Funeral Service will be live streamed.


A Tribute to David

A Friend
To order memorial trees or send flowers to the family in memory of David Paul Palmer, please visit our flower store.