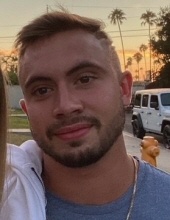 Collin Combe DuQuet, 24, passed away suddenly on August 15, 2021. Collin was joyfully brought into this world on July 1, 1997 in Ann Arbor, Michigan. The son of Patricia Combe and Frank DuQuet, Collin was brilliant, caring, and fiercely loyal. He was adored by his sister, Alivia. He is a graduate of Northville High School. He served in the U.S. Air Force and was honorably discharged. As a senior student at DePaul University, Collin was studying environmental science and made the Dean’s List every semester. He was passionate about making a positive impact on the world.

Collin was a voracious reader, avid movie critic, and music lover. He was quick-witted and held friendship in the highest regard. His charisma, energetic spirit, and creativity is cherished by his family and friends. He was deeply loved and will be profoundly missed. Collin is survived by his mother Tricia (Chris); father Frank (Vickie); sisters Alivia and Megan; brother Thomas; aunt Lynda “Yadda” (Dennis); aunt Sheryl (Matt); grandparents Gloria Combe, Russ McDonald (Caroline), Sharon & Dan DuQuet, and Olga & David Drummond; and many cousins. He is preceded in death by his grandfather Charles “Chuck” Combe.

A visitation will be held on Friday, August 20th from 4:00 – 8:00pm at Schrader-Howell Funeral Home, 280 South Main Street, Plymouth. A funeral will be held on Saturday, August 21st at 11:00am at First United Methodist Church in Northville (777 8 Mile Road, Northville, MI 48167) with a celebration of life to follow immediately after the services.
To order memorial trees or send flowers to the family in memory of Collin Duquet, please visit our flower store.