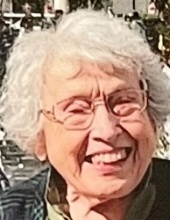 Clara Lukens Mueller, age 92, died February 6, 2022. She was born on April 5, 1929, in Reading, Ohio, to Frank and Lena Broermann. One of Clara’s greatest traits was her ability to remain positive about any situation. This included raising her children alone after the sudden death of her first husband or becoming a stepmother to nine additional children when she remarried her devoted husband of 38 years, James Mueller. As matriarch of her large family, she lived by her Christian values and made a point of connecting with and being of service to others.

Clara loved being surrounded by family and friends and was tireless about planning holiday gatherings, family reunions, and other events that brought people together. Being a wife, parent and grandparent were her proudest accomplishments. Clara graduated from Good Samaritan School of Nursing in 1950 and moved to the Detroit area in 1954. In addition to her eight children, and eight stepchildren, she is survived by 15 in-laws, 32 grandchildren, and 14 great-grandchildren. Clara will also be greatly missed by her sisters Wilma Stall, Alma Huneck (Robert), and Mildred Greiner (Paul). In addition to her parents, Clara was preceded in death by her first husband Bob Lukens, her stepson Paul Mueller, four brothers, and two sisters.

Clara will be in-state on Friday, February 11, 2022 from 9:30 A.M. until the time of the Funeral Mass beginning at 10:00 A.M. at Our Lady of Good Counsel Catholic Church, 47650 North Territorial Road, Plymouth. For those who are unable to attend, the Funeral Mass will be live streamed. Following the Funeral Mass, there will be a luncheon at the Church, then, after the luncheon, Clara will then be laid to rest at Riverside Cemetery in Plymouth.


To order memorial trees or send flowers to the family in memory of Clara Lukens Mueller, please visit our flower store.