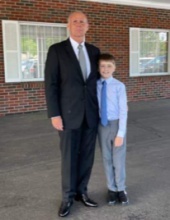 He is the beloved and devoted husband of the late Nancy Ziomek; loving father of Carey Ziomek and the late Christopher Ziomek; proud grandfather of Carter Ziomek. He is deeply loved and will be greatly missed by his sister, Tina (John) Collins; (Christopher is pre-deceased by his brother, the late Keith Ziomek), his nieces and nephew, Leah (Stephen) Maniace, Christina (Bryan) Henriquez and Nickoli (Melissa) Ziomek and Great-nieces and nephews, Jackson Henriquez, Joshua Henriquez, Liliana Maniace, Kinsley Maniace and Zeke Ziomek.

Christopher grew up in Westland and attended Wayne State University in Detroit and then went on to Wayne State Mortuary School and became a licensed Funeral Director. He and his wife, Nancy formerly owned the Ziomek Funeral Home in Livonia. He lived in Canton and Livonia before moving to and residing in Plymouth for the last two years.

Christopher was devoted to his family and they tell us that his grandson, Carter was “number one” in his life. He adored Carter and loved spending time with him. Their bond of unconditional love and joy was heartwarming to anyone seeing them together.

All services for Christopher will be private.

To order memorial trees or send flowers to the family in memory of Christopher Bruno Ziomek, please visit our flower store.