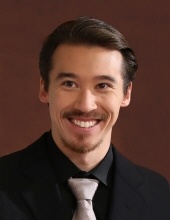 For Japanese version of obituary please visit Chris's obituary located below on the funeral home homepage. Chris Reed, Robert Christopher Reed, age 30 of Elk Grove Village, Illinois passed away on March 14, 2020. He was born on July 7, 1989 in Kalamazoo, Michigan to his parents, Robert F. and Noriko Reed. He is survived by his parents, and his sisters, Cathy Reed and Allison Reed. Chris Reed was a professional ice dancer representing Japan with his sister, Cathy Reed from 2006-2015 and then with Kana Muramoto from 2015-2018. He is a 10-time Japan National Ice Dance Champion, 2018 Four Continents Bronze Medalist and a 3-time Olympian. His joy and passion for figure skating were viewed by people all over the world. Chris came from a Japanese-American family. His mother, Noriko, loved figure skating and introduced the whole family to the sport; Cathy at the age of seven, Chris at the age of five, and their younger sister Allison at the age of three. Cathy and Chris teamed up and started ice dancing together in 2001, with little Allison following in their footsteps. In 2006, Cathy and Chris became the U.S. Novice National Ice Dance Champions but then decided to represent Japan, their mother’s home country, in international competition. It was the start of a long and distinguished career. Cathy and Chris won the Japan National Ice Dance Title seven times and competed in two Olympic Winter Games in 2010 and 2014, as well as eight consecutive World Figure Skating Championships. Their performances captured the hearts of many and brought more popularity to the sport of ice dancing in Japan. In 2015, Cathy announced her retirement from competitive figure skating, becoming a coach and choreographer in Japan. Despite having four knee surgeries, Chris in his heart felt that he still had more to give to the sport. He teamed up with Kana Muramoto for another three years, capturing the Japan National Ice Dance Title three times, competing at the 2018 Olympic Winter Games, and winning the Bronze Medal at the 2018 Four Continents Championships, making history by becoming the first Asian Ice Dance Team to earn an ISU Championships Medal. Chris announced his retirement in 2019, ending his 18 year career as a competitive athlete. Like his sister Cathy, Chris also decided to become a choreographer and coach in Japan. In January of 2020, they teamed up again, as coaches of Kinoshita Academy at the brand new Kanku Ice Arena in Osaka. Chris dedicated his life to promote Japan Ice Dancing. His passion, his energy and memorable smile will never be forgotten and will be carried on through both his sisters, to future generations of ice dancers. The funeral service will be held at the Schrader-Howell Funeral Home, 280 South Main Street, Plymouth, Michigan on Saturday, March 21, 2020 beginning at 8:00 A.M. Due to the current world situation concerning the COVID-19 pandemic and in order to limit physical attendance in line with social distancing precautions, the family wishes to extend an invitation to all family, friends and the vast number of fans from all over the world to view the funeral service for Chris Reed by way of live-streaming through the Schrader-Howell Funeral Website, Facebook and Instagram beginning at 8:00 A.M. Eastern Daylight Time on Saturday, March 21, 2020. To view the funeral service from the Funeral Home website, select the “Tribute Wall” tab above and follow the link provided.

Memorial contributions may be made in memory of Chris Reed to:


To order memorial trees or send flowers to the family in memory of Chris Reed, please visit our flower store.