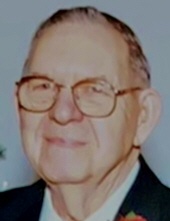 In his early years, Charles served as a Corporal in the US Army during the Korean War. Prior to and after the war, he worked for Shipley’s Standard Service in Detroit, where he met the love of his life Janet Rose Wagner. They later married in 1955 in Angola, IN. Charles was employed by various automotive companies, but spent the majority of his career and retired from General Motors in 1995.

He was a kind, hard-working and humble man, who was dedicated to his wife and family. He enjoyed camping, playing his harmonica, and coaching his son’s hockey team. A favorite and shared hobby was to make birdhouses that his wife would then paint, display, and gift to friends and loved ones. He was a big fan of watching TV westerns and car races, as well as an occasional afternoon nap in his recliner.

Charles is preceded in death by his parents and brothers John and Carl. He is survived by Janet, his wife of 66 years; his children David (Cindy), Phillip (Jackie Steinaway), Nanette (Ken Richey), Michael (Nancy), Eric (Barb Kubik); his sisters Margaret (Gene) Greear and Sandra Jansen; nine grandchildren and four great-grandchildren.

Visitation and funeral services will be held June 3, 2022, from 9:00 am to 11:30 am at Schrader-Howell Funeral Home in Plymouth, MI. Burial with military honors will follow at the Rural Hill Cemetery in Northville, MI.

In lieu of flowers, please consider a gift to Angela Hospice, 14100 Newburgh Road, Livonia, Michigan 48154 in Charles’ name, for the loving care he received.

To order memorial trees or send flowers to the family in memory of Charles Phillip Rose, please visit our flower store.