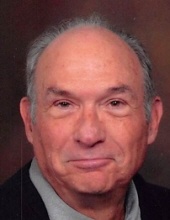 On Wednesday, July 24th, 2019, Charles George Innes our loving, kind and generous husband, father, grandfather passed away at the age of 74.

Charlie (George) was born on April 9th, 1945 to Charles and Elizabeth Innes. Raised in Allen Park, MI, he continued his education at Michigan State before graduating with a BBA from Western Michigan University in 1967. After starting a career at Ford Motor Company, he went on to earn an MBA & PhD from Indiana Northern University in 1970 and 1972 respectively. In 2000, he retired from Ford Motor Company after a long, enjoyable 33-year career.

Charlie’s character is exemplified in his earning the rank of Eagle Scout through a book binding project for his church. His passion for sports came out in every way possible… rowing, diving, bowling, softball, tennis, darts, pool, and of course, golf. He was always up for a card game or movie. In the quieter times, he was a prolific reader of adventure and detective stories. Tom Clancy being his favorite. Of all the things he loved in life, he cherished the most was family, friends, and people he met along the way.

He married the love of his life and wife of forty-five years, Antoinette Camille Ochylski on February 16th, 1974. Their happiness started with a blind date to a friend’s wedding a couple years earlier. Together, they proudly raised three boys, Charles Scott, Mathew Henry and David Andrew. He imparted on them the wisdom of a frugal Scotsman, their generous spirit and wry sense of humor. To others, he served as a league organizer, a card club host, committee treasurer, financial & tax advisor, tutor or in any capacity one may need. He felt blessed by the special individuals he encountered.

Charlie was preceded in death by his father, Charles, his mother, Elizabeth and his sister, Justine and twin sister, Gloria. He is survived by his wife, Toni, his children Scott (Joyce), Matt (Keri), David (Rachel), and his two grandchildren, Kara and Robyn.

May we be warmed by having shared in his joy-filled life.

Visitations will be Sunday, July 28th from 2:00pm-8:00pm at Schrader-Howell Funeral Home on Main St., Plymouth. A funeral service will be held on Monday, July 29th at 10:30am at Our Lady of Good Counsel 47650 North Territorial Rd, Plymouth, with visitation beginning at 10:00am until of mass. Memorial donations given to any charity of your choice would be appreciated.

To order memorial trees or send flowers to the family in memory of Charles G. Innes, please visit our flower store.