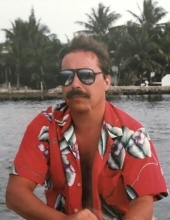 Charles “Chuck” Fuss of Waterford, died February 12, 2019 at the age of 62. He was born in Detroit, MI to the late Charles and the late Theresa (Kaniarz) Fuss. Chuck was the beloved husband of Barbara (nee Buxton) Fuss, and the loving father of William Fuss, and Jamie (Warren) Christen.

Chuck was a great father and a very kind, loving husband. He and Barbara were married for 30 years. Chuck always had a passion for music, playing multiple instruments. He also was a huge hockey fan and took Barbara to go see the Wings play on their first date. Chuck also enjoyed going to the beach in Key West, or taking the family to Elizabeth Lake. He was a true dog lover as well and loved his many dogs he had.

A Memorial Gathering will be Friday, February 15, from 4:30-8pm and Saturday, February 16, 1-6pm at the Schrader-Howell Funeral Home, 280 S. Main St., Plymouth, MI 48170. In lieu of flowers, memorial donations may be made to the Rapid Response Team at Saint Joseph Mercy Oakland Hospital.
http://www.stjoesoakland.org/giftinginformation
To order memorial trees or send flowers to the family in memory of Charles "Chuck" Fuss, please visit our flower store.