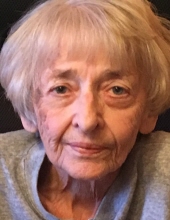 Carole Muraske died peacefully in her home in Plymouth, on March 5, 2018. Carole was born on February 23, 1929, on her sister's birthday, who was none-too-pleased as she wanted a tricycle.

Carole grew up in St. Paul, Minnesota, where she met her future husband, Richard Muraske. They moved to New Jersey, and then settled in Michigan in 1968. A Tiger fan from the time she moved to Michigan, Carole never missed listening or watching a game.

Carole loved to bowl, golf and shop. She was most proud of her perfect driving record. Carole is survived by her five children, Michael (Carole), Kathy (Brad), Patrice (Jeff), Bill (Nanci), and Dan (Amy), 12 grandchildren, four great-grandchildren and her brother, Dick (Carole) Jensen.

In lieu of a funeral, a private celebration of her life will be held among her children.
To order memorial trees or send flowers to the family in memory of Carole L. Muraske, please visit our flower store.