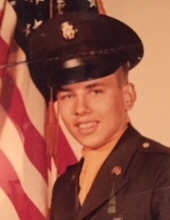 Funeral service Saturday, April 7th at 4:30pm at the Schrader-Howell Funeral Home 280 South Main St, Plymouth. There will be a visitation beginning at 2:00pm until time of funeral service. Burial and full military honors will be held at Great Lakes National Cemetery in Holly, MI on Tuesday, April 10th at 12:30pm
To order memorial trees or send flowers to the family in memory of Brian Michael Major, please visit our flower store.