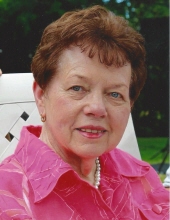 Barbara met her husband Larry while working in downtown Detroit for the Wayne County Road Commission; she was a secretary and he a young attorney. They were married on October 4, 1958 and settled in Plymouth to start a family at their home on Hammill Lane in Old Lake Pointe. In 1970, with their family continuing to grow, they decided a bigger house was necessary and moved to the other side of Plymouth to a brand new subdivision off Ann Arbor Road.

Her husband Larry passed away in 1991, but Barb remained in the home for a total of 48 years. She provided a place for her 5 grandchildren; Chris, Lauren, Danielle, Nolan and Gavin and 1 great grandchild; Lucas to visit.

Summers and most holidays were spent up north at their cabin on Canada Creek Ranch and also traveling around North America by motorhome. Barb was a regular volunteer at all of her children’s schools and was eventually employed in the school libraries; Fiegel and Tonda until her retirement in 2000. After retirement, she was able to take many trips including several to Europe and continued pursuing her multitude of interests. Ice skating, baking, gardening, the symphony, art, reading and scrap-booking were just some of her hobbies. Barb was a true craftswoman. She tackled basket weaving, macrame, sewing, and dried flowered arrangements to name a few. Christmas was by far her favorite holiday. There was always a real tree and 100% original ornaments. Every Halloween costume was hand made. Barb played the piano and made sure all of her kids played an instrument. She was constantly on outings with her friends and it was often difficult to track her down.

The activity she loved the most, however, was spending time with her Grandchildren. Grandma Barb or “Ama” was creative in coming up with every type of outing imaginable.

Barb was a devoted member of the Catholic Church and made sure her family attended Mass every Sunday. The Schendels were a founding family of St. Kenneth Catholic Church in 1967. Barb’s strong faith in God helped her get through the tough times and show gratitude for all the blessings in her life.

She was loved beyond words and will be missed by all. We love you Mom.

Visitation will be Sunday, October 28, from 2-8pm at the Schrader-Howell Funeral Home, 280 S. Main St., Plymouth, 48170. Her Funeral Mass will be Monday, October 29, at 10am at Our Lady of Sorrows Catholic Church, 24040 Raphael Rd., Farmington Hills, 48336. In lieu of flowers, donations to Saint Christine’s Soup Kitchen, The Parkinson’s Foundation or Children with Hair Loss can be made.

To order memorial trees or send flowers to the family in memory of Barbara J. Schendel, please visit our flower store.