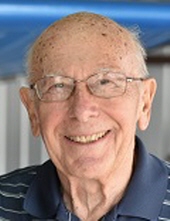 Arthur was born in Detroit on October 10, 1929 to his parents, Arthur Robert Armstrong, Sr. and Freda (nee Wittenbach) Armstrong. He is the beloved and devoted husband of Christine (nee Bannhard) Armstrong; dear father of Catherine (Kevin) Kelly and the late Arthur Robert (Denay) Armstrong, III; proud grandfather of Ryan Kelly, Scott Kelly and Alex Armstrong. Arthur is deeply loved and will be greatly missed by his brothers, Thomas (Mary Alice) Armstrong and James (Ann) Armstrong.

From 1972 until 1996, Arthur and his brother, Tom were co-owners of Armstrong Buick in Livonia. He proudly served his country as a member of the U. S. Marine Corps during the Korean War. In his 50s, Bob took up flying and received his pilot’s license where he frequently flew as part of the Dawn Patrol out of the Canton-Plymouth Mettetal Airport. Arthur was an active member of American Legion Post 390 in Detroit.

He loved photography and was also an artist. Photography and painting go hand-in-hand. As an artist or a photographer, both hobbies offer a wonderful way to relax and allows the artist and photographer to focus on a particular subject alone. Arthur had a vivid imagination and life experiences helped him to translate his thoughts and ideas on canvas. Until the age of 85, Arthur was an avid skier. There was nothing like preparing for a big day on the slopes. The thrill of the downhill speed and the visual of snow sparkling in the early morning sun may have given him some of that inspiration all artist get from everyday life experiences.

Friends may visit the Schrader-Howell Funeral Home, 280 South Main Street, Plymouth on Thursday, March 21st from 3:00 P.M. until 9:00 P.M. A funeral service will be held at the First Presbyterian Church of Plymouth, 701 Church Street, Plymouth on Friday, March 22nd at 12:00 P.M. officiated by the Reverend Emily Riley-Campbell. Arthur's cremated remains will later be interred at Riverside Cemetery in Plymouth.