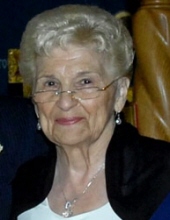 Arelia Jacobs of Northville, died April 14, 2018 at the age of 88. She was born in Detroit on December 25, 1929 to parents Partin and Nellie Buibas. Arelia is survived by her beloved husband of 72 years, George Jacobs, her loving children George (Cheryl) Jacobs, and Elaine Rogozan, her precious grandchildren Matthew (Anna), Rachel (Jason), Sara (Christopher), Melissa (Nathan), and Rebecca (Benjamin), her cherished great grandchildren Anna, Katelyn, Abigail, Joshua, Addison, Andi, Cora, Olivia, and Brooks and her sister Mary Lazar. Arelia was preceded in death by her beloved son Carl at the age of 19.

Arelia worked at Hudson’s in the bridal registry department. In 1990, she and George moved to Venice, Florida. They then spent their winters in Florida and summers in Michigan. She also enjoyed her time in northern Michigan in St. Helen at the cottage they built. Arelia was a faithful and faith-filled woman who taught her children to fear the Lord.

Visitation will be Monday, April 16, 2018 from 2-8pm at Holy Transfiguration Orthodox Church, 36075 Seven Mile Road, Livonia, 48152. Her Funeral Service will be Tuesday, April 17, 2018 at 10am. In lieu of flowers, memorial donations may be made to the Church, Angela Hospice, or a charity of your choice.
To order memorial trees or send flowers to the family in memory of Arelia Jacobs, please visit our flower store.