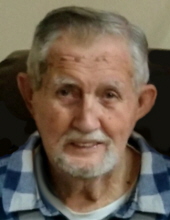 Allen J. Walton, age 87 of South Lyon, passed away on April 12, 2020. He was born on August 20, 1932 in Obion, Tennessee to the late Albert and Ether Walton. Allen is survived by his children, Bob Walton, Diane (Al) Garrett, and Timothy (Charlotte) Walton. Loving Grandfather to Allen (Sherice) Groff, Darren Walton, Logan Walton, Matthew Walton, Josh Irwin and great-grandfather to Ashley Groff, Maizey Groff, and Lincoln Groff. Allen was one of 13 children, and is survived by his last living siblings Henry Walton and Ann Butler. He is preceded in death by his beloved wife Lucille (Brown) Walton.

Allen had an extraordinary life with many professions. He was honorably discharged from the USAF as a Staff Sergeant after serving in the Korean War, and went on to join the Army National Guard. He attended Barber College in Detroit, MI and went on to open Walton's Barbershop in Plymouth, MI. While also working nights as an auxiliary police officer in Northville, MI. He semi-retired to work and train on the family horse farm as a licensed trainer and became a harness racing judge. He ran many other small businesses and was a true entrepreneur at heart. He was a kind and engaging man whom loved to tell a great story to anyone that would listen. He is dearly loved and will be truly missed by all whom had the pleasure of knowing him.

Memorial Donations in Allen's name to the Alzheimer's Foundation.

A private family gathering will be live-streamed on Thursday, April 30th at 2:00 P.M. to 2:30 P.M. from the Schrader-Howell Funeral Home. Please click the “Tribute Wall” link at the top of Allen's obituary at 1:50 P.M. in which time the live-streaming will begin. The immediate family will gather privately prior to the streaming.
To order memorial trees or send flowers to the family in memory of Allen Walton, please visit our flower store.