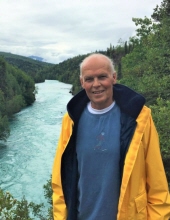 William Dale Simescu, 67, passed away peacefully at Munson Hospice House on July 13, 2019 after battling cancer for eleven and a half years.

William was born in Detroit, Michigan to Eugene and Nancy on October 7, 1951. He graduated Thurston High School in 1969. After high school, he attended Northwestern Michigan College in Traverse City, Michigan and then Western State College in Gunnison, Colorado before moving to Crested Butte, Colorado. William began his building career working on the family cottage on Clear Lake in Atlanta, Michigan. In Crested Butte he continued to perfect his trade while also living an adventurous life as a “ski bum” (his words) in the Rocky Mountains. William moved back to Traverse City, Michigan, in the 1980s where he raised two children, Will and Layne, with his former spouse Rebecca Austin.

William ran his own contracting company in Traverse City for over twenty-five years. He excelled at woodwork of all kinds and evidence of his craft remains across Northern Michigan in the form of cabinetry, wood floors, porches, housing additions, remodels, and much more. William loved skiing and even taught his children to ski at two years old so he could have more ski buddies. He also loved to sail and powerboat in Lake Michigan, and he was a member of the Grand Traverse Yacht Club for many years. William never liked to “sit around,” as he called it, and he strived to live life to the fullest until the very end. He traveled with his kids everywhere from New York City to Alaska.

Friends and family remember his easy-going way and the smile he had for everyone. His parents and his brother, James, preceded William in death. His children, his brother Barry (Dorothy), and nephews Daniel and Tyler survive him.

A visitation will be held on Tuesday, July 23 from 11 a.m.-3 p.m. at Covell Funeral Home in downtown Traverse City.

A reception will be held from 4-6 p.m. at the Grand Traverse Yacht Club. In addition to flowers, contributions can be made to the Grand Traverse Regional Land Conservancy or the Sierra Club. If you would like to send flowers, please send them to Covell Funeral Home in Traverse City. The family would like to thank the Hospice nurses and Hospice House for their wonderful care of William in his final days.

A private graveside service will be held at Parkview Memorial Cemetery in Livonia.
To order memorial trees or send flowers to the family in memory of William Dale Simescu, please visit our flower store.