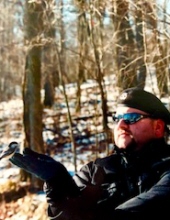 Ronald Gerard Sopha, age 51 of Garden City passed away on May 18, 2020. He was born on March 5, 1969 in Garden City, Michigan to the late Ronald and Judith (Susewitz) Sopha. Ronald is survived by his brothers, James Sopha and Tim (Tammy) Sopha. Loving uncle to Joseph Sopha, Ashley Sopha, Matthew Sopha, Justin Sopha and Madison Sopha. Ron is preceded in death by his brother Robert Sopha. Ronald enjoyed the loving support of the Paulina family who were dear friends of his Mom and Dad.

Ronald was extremely active in martial arts. To say he was a fan, is an understatement. It was a major part of his life. He earned his black-belt and continued further into the sport as an instructor. He really enjoyed teaching and training with his students. When he was not teaching, Ron enjoyed amateur film and photography. Ron was a sweet and genuine person, and cherished time spent with his nieces, nephews, colleagues, friends and neighbors. He will be deeply loved and immensely missed by all who knew and cared for him.

Ron’s wishes were to be cremated. A Memorial Gathering and Service will take place at the Schrader-Howell Funeral Home, 280 S. Main St. Plymouth, MI 48170 later this summer.

In lieu of flowers, donations will support the Lipodystrophy Syndromes Research Fund at the University of Michigan. Checks may be made to “University of Michigan” and sent to the Michigan Medicine Office of Development, 1000 Oakbrook Dr., Ste. 100, Ann Arbor, MI 48104. You may also call 734-764-6777 or visit the website victors.us/ronsopha to make your gift.
To order memorial trees or send flowers to the family in memory of Ronald Sopha, please visit our flower store.