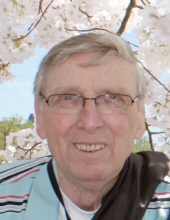 Michael O. Hare of Fairfield Township passed away at the University of Michigan Hospital in Ann Arbor on Saturday, August 17, 2019 at the age of 81. He was the son of the late Winifred A. (née Judson) and Arthur L. Hare. He is survived by wife Tu Hee, five children, nine grandchildren, and six great-grandchildren.

Mike was born on New Year's Eve in 1937, and graduated from Sand Creek High School in 1955. Soon after, he enlisted in the Air Force where he served as an Explosive Ordnance Disposal Specialist and telephone maintenance supervisor for 26 years. He served two tours of duty in Vietnam, and received two Bronze Stars, including one with valor. Between 1976-1981 he was stationed in Osan, "the longest 1 year tour in history," in South Korea, where he met Tu Hee. He retired from the Air Force with the rank of Master Sergeant and returned to Michigan in 1981, where he worked in the automobile industry until his retirement in 2007.

In retirement, Mike divided his time between Adrian and Las Vegas, playing golf, reading science fiction, and building model ships. In his final years, Mike learned to play the Dobro. He practiced for several hours a day, achieving a remarkable proficiency.

Mike was known for his boisterous high spirits and hot temper as a young man, but in his later years, he mellowed into a gentle, warm, and compassionate soul, with a wry sense of humor. His was a life governed by a deep generosity of spirit, a lively curiosity spanning a wide range of interests, and a lifelong love of learning.

A Memorial Service will be held at 6 p.m., Friday, September 20, 2019 at the Hills of Lenawee Golf Club. All are welcome to attend and celebrate Mike's life. A Funeral at Arlington National Cemetery in Virginia will follow on November 22, 2019. Memorial donations may be sent to the EOD Warrior Foundation, http://www.eodwarriorfoundation.org/donate.
To order memorial trees or send flowers to the family in memory of Michael O. Hare, please visit our flower store.