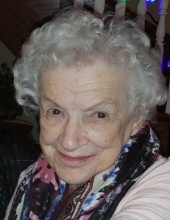 Surrounded by her family, Marian took the hand of the Lord and reunited with her dearest husband Bud and daughter Lynne on Thursday, June 3rd, 2021.

She was wed to Norbert (Bud) Eichner on October 6, 1951 and they stayed best friends until he passed in April, 1990. Along the way, they brought nine (9) children into the family, which has now grown to include seventeen (17) grandchildren, fourteen (14) great grandchildren, and one (1) great great grandchild.

Marian will be remembered as the ultimate mother, with a passionate involvement in the lives of her children, grandchildren and great grandchildren. She loved to sew, and was known for her extraordinary quilting, which she continued until only recently. Since 2007, Marian spent summers in the U.P. at her childhood home, which she was lucky enough to purchase when it became available.

Marian was born in Dearborn, Michigan and at age 4 moved to DeTour Village on the eastern tip of the Upper Peninsula. After her mother passed when she was 10, she moved back to Dearborn and lived with the families of her sister Blanche and brother Joe. It was Joe who lived next door to the Eichner’s in Dearborn.

Family meant everything to Marian. She valued the time spent with her by all of her kids; whether it was shopping for fabric or polish pottery, enjoying a holiday get-together at the farm or elsewhere, or even sitting together to watch the Hallmark Channel – which rarely if ever got changed.

Marian will be laid to rest in Holy Sepulchre Cemetery in Southfield following the Funeral Mass.

Memorial gifts should be directed to St. Jude’s Children’s Hospital in honor of Marian http://stjude.org/donate
To order memorial trees or send flowers to the family in memory of Marian Eichner, please visit our flower store.